Commuting via eBike, 90 Days In

Back in June I bought a Hill Topper Electric Bike Kit (Ranger, 36v motor). I mounted the kit on my Jamis Sport hybrid bicycle. It’s now September, about 90 days after I started using it, and I thought I would summarize the experience.

Prior to the eBike

I have been commuting to work by bicycle for several years now. I did it with an old Wal-Mart bike, first, to prove that I could do it. After a few weeks I upgraded to a new Jamis Sport. It was a great bike for hauling kids around in a trailer, but quite heavy for some of the hills on my way to work.

After a few years, I upgraded to a used road bike. I love the light weight, but I often would take the bus to work to avoid getting sweaty, or maybe I just wasn’t feeling it that morning.

After seeing a couple of ebikes in the wild I decided to give one a try. My goals were:

There are so many eBikes and kits out there it’s hard to evaluate all of the options. I considered some of the lower end bikes, but most of the “cheap” ones are still in the $1200-1500 range and given that I already had two bikes that seemed a bit extravagant.

Kit prices vary wildly. The market appears to be flooded with a lot of cheap knock-offs and fly-by-night manufacturers. My priority was finding a company with a solid track record. If you run into issues with equipment, you want a company that will be around to answer questions. Furthermore, batteries don’t last forever so eventually they will need a replacement. Rather than guessing on compatibility, it’s nice to go with the company you originally bought the kit from.

I chose Hilltopper / Ukko because they seemed to match all that criteria. After making that choice, I was still confronted with a choice of 24 volt or 36 volt motor.

The 36 volt motor made more sense to me because it can top out around 15-20mph and provides a bit more oomph going up hills. I planned on also pulling a trailer with kids and/or groceries.

Installing the kit was super easy. It’s basically just switching out the front tire and mounting the throttle and battery. Pretty much everything I needed, save the wrench, was in the box.

I did find that the cloth/canvas wrapping the battery eventually separated from the battery switch. It hasn’t caused any issues, other than the annoyance of occasionally trying to find the switch and see if I left the battery on (you typically want to turn it off when not in use).

My ride to work is either 5 miles (short route, more traffic) or about 7 miles (longer route, less traffic).

The 36 volt motor tops out at a little over 20 mph on a flat road. This profile from one of my rides gives you a good idea of what speed I’m running. This is with me peddling a bit - I still want to get some decent exercise out of this! I imagine that you could ride without pedaling as much, but you’ll wear the battery out faster and, frankly, that’s boring. If you’re going to do that, you might as well go with an electric scooter.

You definitely want to pedal along with the motor up hills. I haven’t tried it, but I’m pretty sure that on some of the steeper hills you might even come to a dead stop if you quit pedaling. You have to think of the motor (particularly the 24 volt one!) as a friend giving you a nice push. (Unfortunately, your friend also adds a bit of weight!)

I was a little concerned about having a front-wheel drive, but for the most part it hasn’t really been noticeable. If I’m accelerating and turning in loose gravel, I have to be careful because it tends to spin. Other than that, I rarely notice that the front wheel is doing most of the work.

I have found that I met all my goals. I ride the work to bike much more often, and very rarely drive anymore. Even if I know I have meetings across town during the day, I can take the bike knowing that I won’t be sweaty for short rides. I also found that I’m more comfortable in traffic, which is a bigger deal than I anticipated. I can go from a stop to 20mph in much less time with the motor assisting my effort, and I can maintain a higher speed when going up hills.

I still commute with my road bike out on occasion, but much less often. I like how the ebike shaves about 5 minutes off my ride.

Really, the motor is just plain fun, too. I used to ride motorcycles, and while this is nothing like that, it still has a nice kick to it that makes for a pleasant ride.

Overall, I’m happy with my purchase. I drive less, and my commute is less stressful.

There’s a bright future for ebikes - as more people discover them and they drop in price, we should start seeing more of them on the road. Commuters who might have been afraid to jump into the traffic fray on their own pedal power will be more comfortable given some electric assistance. I hope that this will encourage more people to trade four wheels for two, especially for those shorter, sub-10-mile commutes. In turn, that will increase the demand for more cycling infrastructure, which will (hopefully) morph into a virtuous circle, making it easier for even more people to cycle to work. 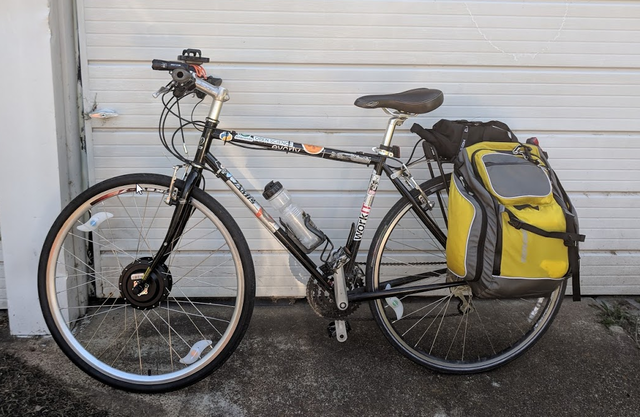